Contents of this page
Contact us to make a reservation for the restaurant at:

Surprisingly huge vessels rapidly come and go, overwhelming the buildings along the coast. Cargo ships that approach from the opposite direction convey full-throttle sounds through to here.

Li Hung-chang Road is on a height and used to directly link Shunpanro to Injoji temple. The name of this small road is difficult to read without the indication in hiragana beside it. It was named after Li Hung-chang, the ambassador plenipotentiary who visited Japan all the way from the Qing dynasty to end the unfortunate war between Qing and Japan, only twenty and a few years after Japanese people stopped to make a topknot.

Ambassador Li was harmed by a heartless assailant on his way to Injoji, where he had been staying, after finishing the third negotiation session for the Shimonoseki Treaty. After the peace meeting was resumed upon his recovery, Li went used this small road on the cliff, avoiding the main street.

On April 18, 1895, Li signed the treaty with Ito Hirobumi, Mutsu Munemitsu, and others and went home whereupon a newspaper announced that he appreciated visits by the residents of Shimonoseki. Subsequently, this road commanding the sea was called the Li Hung-chang Road, though it is not known who started to use the name.

This name can be said to be a small token of Shimonoseki residents in return for the continental generosity and warm considerations shown by the ambassador plenipotentiary. The small road remains as a symbol of friendship between Japan and China after 100 years. 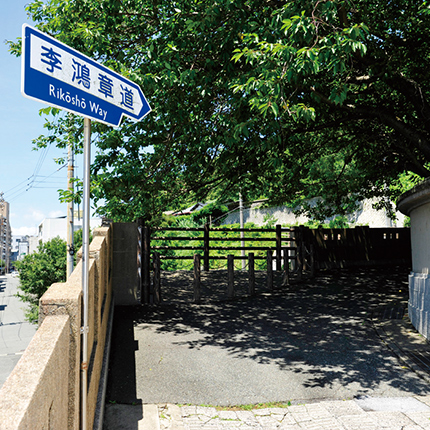 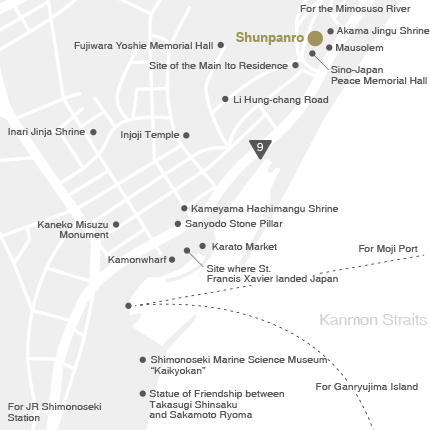 Site of the Main Ito Residence

When told that the Silk Road connected to the ocean in this place, many people indicated that they cannot believe that. However, as long ago as 1800 years, King Koman, a descendant of the first Qin Emperor made many contributions to Emperor Chuai, who resided in the Toyuranomiya Place in Chofu, Shimonoseki, which included silkworm eggs.

When the Empress Jingu conquered Kumaso, she departed the Sea Road and returned triumphantly to the same sea. Francisco de Xavier visited Japan as a missionary from India through Malacca. His first step on the Honshu main island was on the coast of Dozaki, near Shunpanro, just like King Koman.

When the Taira clan was expelled from Kyoto by the Minamoto clan, they were blocked at this strait. The sea surface of Dannoura was dyed deep red by their blood. Miyamoto Musashi left an inn near here for his duel on Funashima (a.k.a. Ganryujima) island. After defeating Sasaki Kojiro, he returned to the same inn.

On the site of the Main Ito Residence right beneath Shunpanro, a part of the grand mansion remains. The Ito family was the most distinguished family in Shimonoseki, and was compared as "Zaiko in the west and Ito in the east". Philipp Franz Balthasar von Siebold visited the site together with a party from the Dutch mercantile house that travelled across the sea. Yoshida Shoin, who came for the inspection of Kitaura, also stayed a while here. Sakamoto Ryoma, as a member of Kaientai, rented a room in the Ito Residence. He called the room "Shizendo" and spent a short time there with his beloved wife, Oryo. 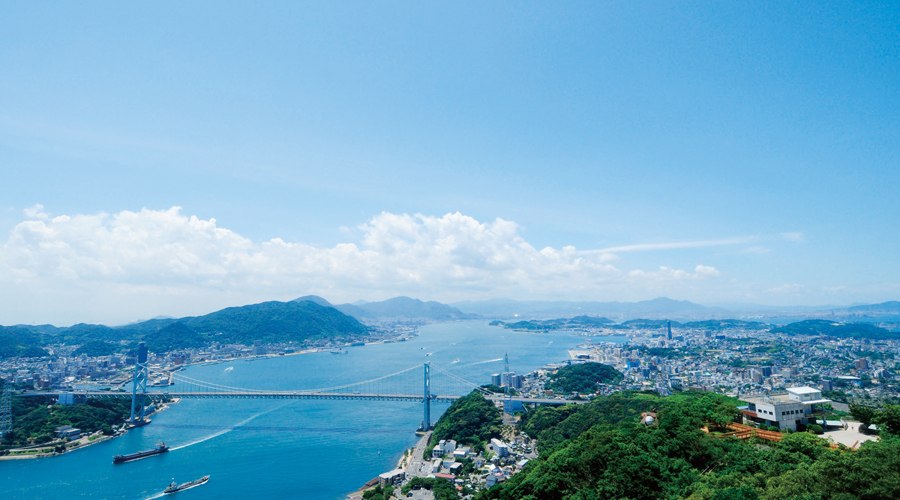 Travel west down National Route 9, and tourists will find a large stone pillar saying "San’yodo" near the main gateway to Kameyama Hachimangu Shrine. While the indication plate says it is the start point, this place is the end of the San’yodo considering Nihonbashi in Edo as the start point of Tokaido. The road was connected to Saikaido in Kyushu, so it used to be called National Route 2 before the Kanmon Tunnel was completed.

Sugawara Michizane and Ashikaga Takauji walked this road with broken hearts. Takasugi Shinsaku flew on this route to Shinchi Kaisho, leading his team for Kaiten Gikyo. Residents of Bakan, who love festivals, dance to "Hacchohama" to exhaustion on this road, singing songs of a cute little baby. The poet Kaneko Misuzu walked this road filled with his passion for poetry. Trains thundered along the Chokan Railway Line, showing off their urban appearance. And on that night when the Emperor and Empress Showa stayed at Shunpanro, the waves of lanterns filled the national route until the morning.

By the way, Moji and Shimonoseki are located across the sea from each other, and both have legends of giants called Ohito (lit. large man).

It is a simple story of a large man that could reach the heavens and cross the straits in one stride. It is funny, though, that all his footsteps and actions remain to date in place names. This legend implies people’s aspiration to traverse the rapid currents between Honshu and Kyushu by foot. Their aspiration came true as the Kanmon Bridge.

There are so many tourist spots in a very small area surrounding Shunpanro, including the nostalgic buildings of Karato, including the former British Embassy, the former building of Akita Shokai, the Shimonoseki Nabe-cho Post Office, and the popular aquarium; Koyokan building, which memorizes Fujiwara Yoshie; Akama Jingu Shrine, which has the mausoleum of Emperor Antoku and the grave of the Taira clan in its precincts; and the Dannoura and Mimosuso rivers. People tend to visit this area of numerous sightseeing spots when they want to have a serene time. 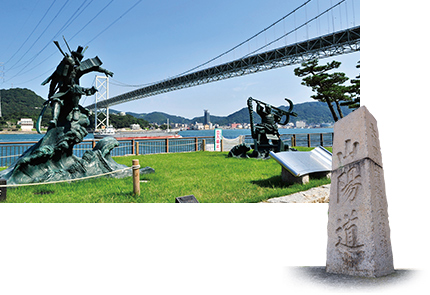 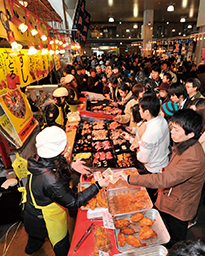 This is a rare wholesale market where consumers and tourists can shop. It has been popular as a resident’s kitchen since opening in 1933. It was relocated and opened in the present location in April 2001. A food and drink event called Ikiiki Bakangai is held on Fridays, Saturdays, Sundays, and national holidays, where fresh seafood, sushi and other items are sold at very low prices. Many people attend this event. 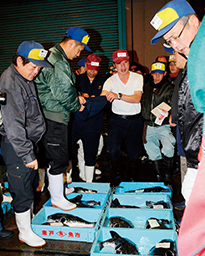 This wholesale market specializes in fugu (blowfish), and approximately 70% of all natural fugu across Japan is unloaded here. With the yells "Eka! Eka! Eka!", auctioneers and agents stick their hands into long bags, and decide prices with their fingers. This bag auction is a famous feature of this market. A seafood processing complex is located near this market, where the auctioned fugu is speedily processed and shipped to different parts of Japan.

Guide to a model tourist course

Shimonoseki commands a view of the Kanmon Straits and is filled with fugu (blowfish) and other dainty dishes, as well as historic spots. A day is not enough to enjoy all its features, including sea bathing in summer and the ten million-dollar night view. The routes for efficiently visiting the area around Shimonoseki with the family or with friends are introduced here. 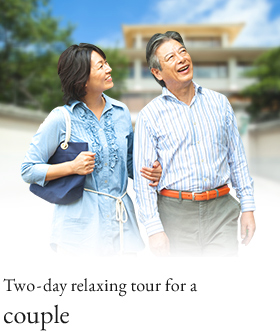 Take relaxing walks around the calm areas of Shimonoseki with your partner. Plan a wonderful tour of history and culture. 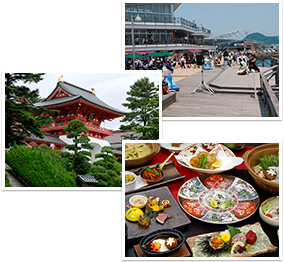 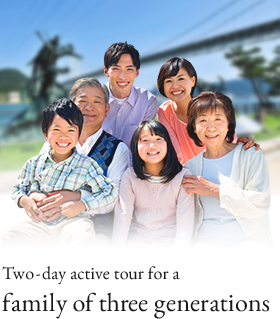 This route is designed for a large family to fully enjoy the attractive features of Shimonoseki. Have a great time with your family! 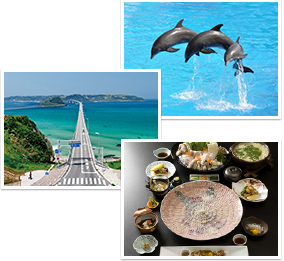 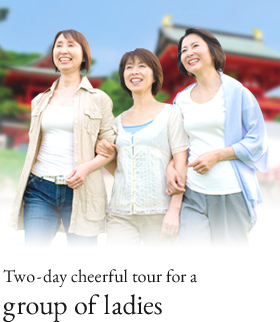 Feel the deep history of Shimonoseki, and appreciate dainty dishes at Shunpanro. Have a petit luxurious ladies’ tour! 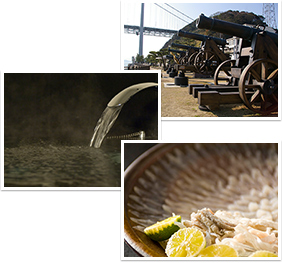 Contact us to make a reservation for the restaurant at:

Contact us to make a reservation for the restaurant at:

About Shunpanro
The origin and history of Shunpanro from the early Meiji era; hospitality and care for customers inherited in Shunpanro through to today

About Fugu / Blowfish
A variety of different and delicious fugu (blowfish) dishes – History until the lifting of the prohibition on fugu dishes, qualification required for cooking fugu, and diverse ways to eat fugu