Michi Fujino, the landlady of Shunpanro, served fugu (blowfish) to Prince Ito Hirobumi, the first prime minister of Japan, who wanted to eat fish on a terribly stormy day in 1887. She was ready to be killed for punishment in doing so because it was prohibited to serve fugu in those days. This hospitality mind and eagerness to entertain customers are still conveyed in Shunpanro.

Contents of this page

The history of Shunpanro goes back all the way to the Edo period.

At the end of the Edo period, Fujino Gen’yo, a Western doctor who served the Okudaira clan in Buzen Nakatsu (Oita Prefecture), quit the job to study freely, and opened a clinic in Amidaiji-cho (the present location of Shunpanro) in Shimonoseki. While he specialized in ophthalmology, he also built herb baths and an entertainment ward for long-term care patients. To patients who wanted a drink, Gen’yo’s wife, Michi, served homemade dishes. It is said that Gen’yo selected this location because the Ito family, who had a residence next door, invited him. Ito Kyuzo, the head of the Ito family at that time, was a wealthy merchant who is also known for material and mental support to Sakamoto Ryoma.

In 1877, Gen’yo bought the site of an Amidaiji chamber, which had been abolished under the government order for the separation of Buddhism and Shintoism, and opened the Getsuharo Clinic anew. The history of Shunpanro started when Michi renovated this clinic and opened a restaurant-hotel with the advice of Ito Hirobumi around 1881 and 1882, after Gen’yo’s death. 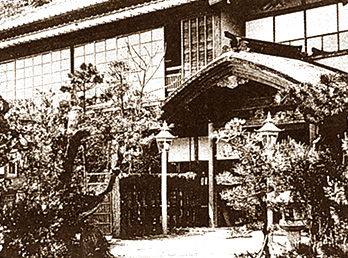 Former entrance to
Shunpanro in the Meiji Era

Shimonoseki was also called "Bakan", and was a busy strategic position in the Kitamae sea route, compared to Naniwa in Osaka. Shimonoseki was also a base for the Choshu clan that aimed at bringing down the Edo shogunate. It is said that Ito Hirobumi, Takasugi Shinsaku, Yamagata Aritomo, and other spirits of the Meiji Restoration frequented this place, attracted by the personality of Gen’yo, who also participated in the Choshu War as an army doctor for Kiheitai and other armies.

The Kiheitai army was based in the Amidaiji temple (present Akama Jingu shrine), and was organized by Takasugi Shinsaku. Prince Ito Hirobumi later praised Takasugi Shinsaku as "moving like thunderbolt and starting like wind and rain" on the monument honoring him in Togyo-an, Yoshida. The present Shunpanro is built on the site of Amidaiji. The restaurant-hotel was named Shunpanro by Ito Hirobumi, after the view it commands, with many sailing ships floating on the calm spring sea. 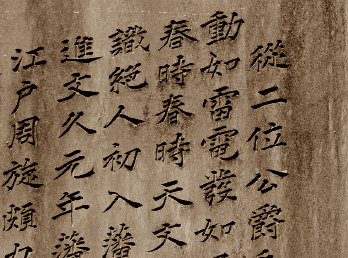 The prohibition on serving fugu (blowfish) dishes was lifted, and Shunpanro became the first publicly licensed restaurant to serve fugu.

At the end of 1887, Prince Ito Hirobumi, who was serving as the first prime minister in Japan at that time, stayed at Shunpanro. The sea was extremely stormy and there was no catch of fish at all. Michi was completely at a loss and decided to serve fugu dishes. She was ready to be killed for punishment in doing so because it was prohibited to serve fugu in those days. The prohibition on eating fugu was placed by Toyotomi Hideyoshi and was inherited until that time. As an increasing number of people were poisoned by fugu, the law stipulated that persons who eat fugu would be imprisoned and/or fined. However, such prohibitions were only formal, and common people in Shimonoseki always loved to eat fugu.

Prince Ito had known its taste because he once ate it together with Takasugi Shinsaku and others, but he pretended as if it had been his first time eating fugu, and praised it "This is wonderful!" In the following year, 1888, Ito ordered Hara Yasutaro, the then Governor of Yamaguchi, to lift the prohibition. Shunpanro thus became widely known as the first publicly licensed restaurant to serve fugu dishes. 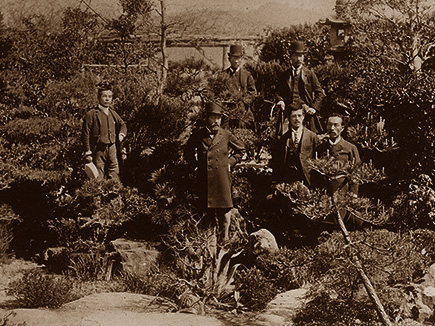 Shunpanro in the post-war period and in the future 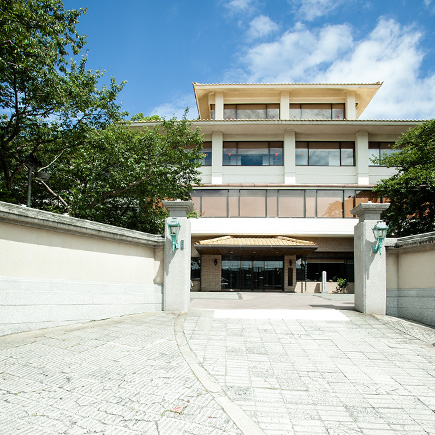 Shunpanro burned down during the war in 1945, but was restored shortly after the end of the war. The Emperor and Empress Showa stayed with us when the Kanmon National Route Tunnel was completed and when the National Athletic Meet was held in Yamaguchi. The waves of lanterns held by residents filled throughout the national route along the coast through to the morning. The beautiful building as we see now, which shines in gold in the morning and evening, was fully renovated and reopened in December 1985.

fugu (blowfish) is listed at the top of dainty dishes from Shimonoseki and has fascinated gourmets throughout history. Since we were honored to be the first publicly licensed restaurant to serve fugu dishes, we have always taken pride in producing taste that suits that honor. As the guest house in Shimonoseki, Shunpanro has observed how dreams come and go in the course of history, and will continue to hand over this tradition to the future.

Introduced a traceability system to identify the places of origin

In 2008, Shunpanro introduced a traceability system to trace back the places of production, development and origin of fugu (blowfish) that is cultivated in its own specifications. We never cease challenges to create one and only materials for clear differentiation from competitors through stable supply of safe materials.

Certification of safety and reassurance by the prefectural government

The Nagasaki prefectural certification of preferable fish farmers is only available for fish farmers who have capabilities to provide information that their cultivated fish is safe and reassuring. Fish farmers must submit necessary documents, pass a review by a third-party institution, and conform with periodic inspections. At present, 59 fish farmers are certified, maintaining the high safety of fugu (blowfish). 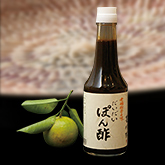 Early harvest of bitter orange that is grown in a contracted farmer in Itoshima, Fuguoka, is squeezed, and mixed in an excellent balance with additive-free, pure-brew soy sauce; Rausu kelp from Hokkaido; and dried bonito from Makurazaki, Kagoshima. The mild flavor unique to handmade ponzu enhances the taste of fugu (blowfish). 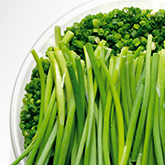 The ultrafine Koto negi(green onion) is indispensable as a condiment for fugu (blowfish). It is called "Yasuoka negi" in Shimonoseki and has been continuously improved in the Yasuoka district since Price Ito Hirobumi lifted the prohibition on eating fugu. We have tried negi from all parts of Japan and reached the conclusion that the soft, mellow and mild Yasuoka negi was the best.

At the end of 1887, Prince Ito Hirobumi, the first prime minister in Japan, wanted to eat fish on a terribly stormy day, when there was no catch of fish at all. The then landlady, Michi, decided to serve fugu (blowfish) dishes. She was ready to be killed for punishment in doing so because it was prohibited to serve fugu in those days. She wanted to do her best to entertain Ito with nice dishes. Thus the history of Shunpanro started with her hospitality mind.

Caring about guests –
First of all, we care about and entertain guests with dainty dishes.

The decision and preparedness of Michi is still conveyed in Shunpanro at this moment. 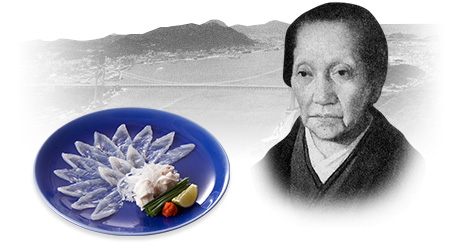 Three policies for "Omotenashi" at Shunpanro